How does Sri Aurobindo's integral yoga help in realization of supramental consciousness? Discuss (2017)

Aurobindo proposed a union of all parts of our being with the Divine and a transmutation into the harmony of a higher divine consciousness and existence.

Maharshi Aurobindo defines Integral Yoga as, a methodized effort towards self-perfection by the expression of the potentialities latent in the being and a union of the human individual with the universal and transcendent Existence we see partially in man and in the Cosmos.

Sri Aurobindo in his work “Letter on Yoga” says, the aim of Integral Yoga is to come into contact with the transcendent Divine beyond the Overmind through the supramental consciousness, supramentalize the consciousness and the nature and make oneself an instrument for the realization of the dynamic Divine Truth and it transforming descent into the earth-nature.

So, unlike Patanjali’s Yoga which aims to rise out of the ignorant world into the divine consciousness, Sri Aurobindo’s Integral Yoga also aims to bring down the supramental power of that Sachidananda into the ignorance of mind, life and matter, to transform them and manifest the Divine here.

It is this reason, Sri Aurobindo in his involution and evolution theory says, There is a call from below and a response from above. The dormant spirit in life feels an urge for mind and with the response from above, mind emerges in this world. The evolution of mind introduces a very great change in life and matter. But Consciousness in mind itself is feeling an urge to evolve into Supermind. The supra-mental descent, therefore, is a logical necessity. After the descent of the Supermind, evolution will proceed through knowledge. The supramental being is called Gnostic being.

Aurobindo says The supramental change is a thing decreed and inevitable in the evolution of the earth-consciousness. The integral Yoga aims at ascending to the Supermind and also to bringing about the descent of the Supermind or the Supramental consciousness. He says, ‘By this Yoga we not only seek the Infinite, but we call upon the Infinite to unfold himself in human life. The supramental descent will make earth a heaven and life beatitude’s kiss. It creates a new race with principle of the supramental consciousness governing the inner and outer individual and collective life’. Hence, with the descent of the Supermind, mind, life and matter will be radically transformed by vanishing all their defects. This earth of Gnostic beings will be above quarrels, diseases and death. The entire personality will be revolutionized and direct communion with the Supreme Reality (Sachchidananda) will be established.

Below diagram depicts the involution and evolution process of Sri Aurobindo, given as reference for aspirants: 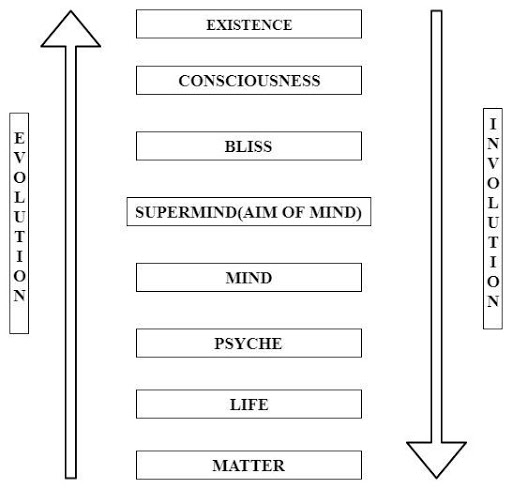